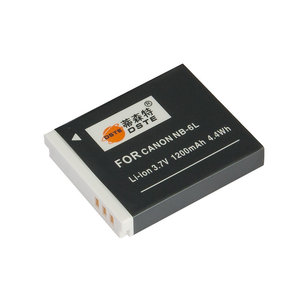 Rechargeable NB-6L battery produced by DSTE for Canon. With an extra set of batteries you will never miss a shot anymore. Between charges this battery lasts a little longer than the original battery, without detrimental effects on your camera or charger!

Capacity: 1200mAh (more photos or videos per charge, completely harmless to your camera or charger).